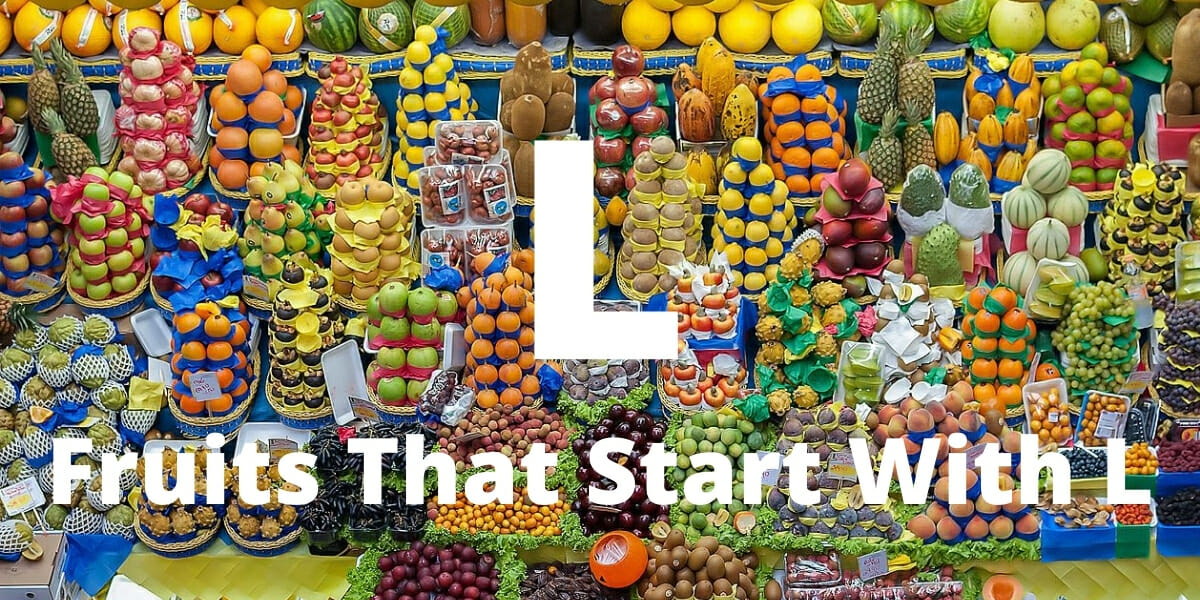 There are a lot more fruits that start with L than the obvious lemon and lime. Most people would guess lemon, lime and probably lychee as a close third but beyond that it can get tricky.

Many fruits in the list below you may never have heard of they are consumed primarily in Asia and are not very well known outside of the countries in which the are regularly grown.

Fruits That Start With L

Lablab is a species of bean that belongs to the Fabaceae family. It is originally native to Africa, but it is grown extensively throughout the tropics as both a source of food for humans and also as a crop to feed livestock.

Both the fruit and the bean are edible, however, they are toxic as the contain cyanogenic glycosides. In order for them to be fit for consumption they must be boiled several times with the water being changed after ever boil.

The leaves can be eaten raw or cooked. When cooking they can be cooked in a variety of ways similarly to spinach. The flowers can also be eaten either raw or steamed, steaming is easier on the delicate flowers than boiling.

Lady is an old French variety which, in Europe and North America, remains popular. The fruits are small but with an aromatic flavor that is pleasant.

Lady Apple is also commonly known as Api (particularly in Europe) after the Forest of Api in Bretagne, where it is believed to have been found in western France.

The Lady Apple, one of the oldest recognized varieties in America, can vary in color from green to bright red to purple, with some red blushing. Sweet-tart is the flesh of this small apple and can be eaten raw, but it is generally cooked to bring out the best flavor.

They can be used and work well combined with pork, ham, chicken or lamb in stuffings or chutneys. Lady Apples are also used for garnishing plates and during the holidays they can be spotted in wreaths.

The Lakoocha fruit is commonly know as the Monkey Jack fruit. When it ripens, it turns from green to dull yellow to pinkish brown. It looks like a papaya that is misshapen and in terms of size can fit in the hand of an adult. And it is a cross between an orange and a custard apple in its flavor.

Trees from the Mahogany tree, known scientifically as Lansium parasiticum, are Langsat or Lanzones. Langsat is a plant that bears tiny fruits that are edible.

In their exterior appearance, these fruits are similar to potatoes and inside they have a white flesh containing inedible, bitter seeds.

Many fruit lovers in South East Asian countries like its refreshingly sweet and tangy taste.

The humble lemon is probably most peoples first choice as a fruit beginning with L. It is used in thousands of different recipes and drinks.

The lemon is primarily used for it’s acidic taste and can be used to give fatty or heavy dishes a bit of a flavor lift. The acidity cuts through other fatty elements in a dish to give a more balanced flavor profile.

For their numerous uses, Leucaena species are grown, including as green manure, a source of charcoal, livestock fodder, and for soil conservation. Jumbie beans (the seeds) can be used as beads.

Some species have edible (unripe) fruits and seeds (namely, Leucaena leucocephala). Leucaena esculenta seeds (called guaje or huaje in Mexico) are eaten with salt in Mexico.

The fruits of the Creek Lilly Pilly (Syzgium australe) are especially tasty, as are the Szygium luehmannii’s slightly tarter fruits. Fresh from the tree, or used to make jams, cordials and sauces, the fruits can be eaten.

Lilly Pilly berries are small fruits that are round to oval in shape, measuring 1 to 2 centimeters in length. In large clusters, the tiny berries develop and the skin is solid, shiny and tense, varying in color from pink-red, violet to magenta.

The thin, white flesh beneath the surface is noticeably crisp with an aqueous and airy, cotton-like consistency. The flesh can be seedless, or contain a pea-size hard seed, depending on the type.

Next after the lemon the lime is probably everyone’s second guess for a fruit that starts with L. It can be used just like the lemon in drinks, but when cooking it does save a different flavor and is particularly suited to spicy dishes to add a bit of extra zing.

The lime is used in a big way in Mexican cooking and in particular as one of the main ingredients in guacamole.

Limeberries, reminiscent of sweet lime with a pulpy flesh not unlike that of citrus, are edible and actually very tasty. To make preserves, the fruit is used and is also steeped to produce an aromatic sweet tea.

The leaves are also used and are swirled into baths in the production of cosmetics.

Limequats are 3-4 cm oval citrus fruit. The glossy green skin is aromatic, with a sweet taste. Yellow is the flesh of the limequats and contains small edible seeds.

Limequats are delicious and have a tangy, sweet flavor. It is possible to eat this fruit whole.

Lingonberries are small red berries that are not quite as sweet but taste similar to cranberries. Many other names are known for the berry, including bearberry, redberry, partridgeberry, foxberry, cowberry, and lowbush cranberry from Alaska.

Tiny, deep ruby in color and tart, this fruit is the Scandinavian counterpart in terms of both taste and use of North American cranberries.

They come from the same plant family as well. In acid soul throughout Scandinavian and northern North American forests, the berries grow abundantly on low-lying evergreen bushes

Buchania arborescens is a small and slender tree native to the seasonal tropical forests of northern Australia, southeast Asia, and the Solomon Islands, commonly known as the little gooseberry tree or sparrow’s mango.

Loganberries, a hybrid between a raspberry and a blackberry, are a late summer plant. Loganberries can not be harvested by machines, which makes it almost difficult to find them in shops.

Longan (Dimocarpus Longan) is a fruit grown in the Asian countries of China, India, Thailand and many others. It belongs to the same family as fruits such as lychee (soapberry)

The loquat (Eriobotrya japonica) is a tree that is prized for its soft, citrus-like fruit, native to China.

Tiny, round fruits that grow in clusters are Loquats. Depending upon the variety, their color ranges from yellow to red-orange.

Lucuma is the fruit of South America’s native Pouteria lucuma tree. It has a rough, green outer shell and a delicate, yellow flesh with a dry texture and a sweet taste that is mostly similar to a combination of butterscotch and sweet potato.

After the lemon and the lime the next most popular guess for a fruit that begins with L is the lychee. If you are a fan of Chinese cooking then you have probably have lychee served to you as a dessert most commonly used as a garnish on ice-cream.