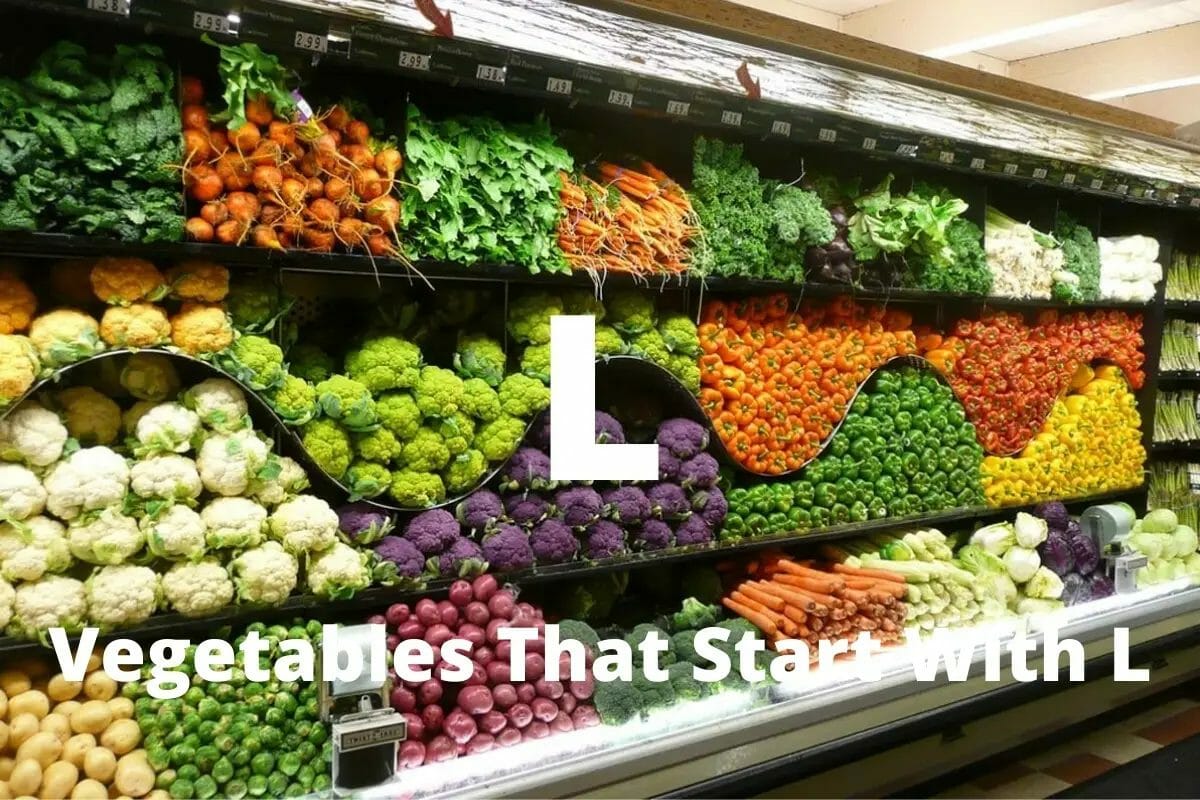 Beyond the obvious leeks and lettuce there are not that many vegetables that start with L.

Most in the list below you may have actually encountered before but they might have gone by a more common name, ‘Land Cress’ being one such example.

Vegetables That Start With L

Lagos bologi is more commonly known as Ceylon spinach or waterleaf and is native to Mexico, the Caribbean, West Africa and most of South America.

It is eaten as a leaf vegetable and contains high amounts of oxalic acid.

Land cress is a perfect replacement for watercress, often referred to as American cress, and can be a great addition to salads.

Land Cress has the same pungent nip as Watercress, which was once very popular for winter salads, but is much easier to grow.

Laver is an edible seaweed (littoral algae), primarily consumed as part of traditional local cuisine in Wales. Seaweed is commonly found along the Irish Sea, where it is known as the slake, along the west coast of Great Britain and the east coast of Ireland.

It is used as the primary ingredient of Lavarbread.

Laver seaweed has been grown since at least the 17th century as a food. It is prepared repeatedly by washing and then boiled until it is known as laverbread and becomes a fluffy mush. The resulting gelatinous paste can then be sold as it is, or rolled into oatmeal.

Leeks are a bulbous vegetable with white flesh and leafy green tops, as are onions and other members of the Allium family. However, the bulb is not round, but just slightly bigger than the stem closest to the roots. The more the bulb is squared, the older the leek is.

Leeks are most commonly used in Leek and Potato soups and are considered a hearty vegetable. Leeks along with Lettuce would be most peoples guess as a vegetable that starts with L.

Lemongrass is a perennial grass that grows in tropical climates (which is curiously not related to the lemon tree). In clusters, the tall stalks grow and can reach six to ten feet in height.

In Thai, Indian, Indonesian, and Vietnamese cooking, the tender, white core of the stalk is desired for its distinct citrus flavor and is a common ingredient.

As a member of the legume family, lentils are grouped with beans and peas because they grow in pods, like all legumes. Lentils are rich in fiber and protein and low in fat, making them a safe meat substitute.

They are filled with folate, copper, phosphorus, cotton, and potassium as well.

Lettuce is usually most peoples number one pick when it comes to naming a vegetable that begins with L.

Lettuce, (Lactuca sativa), the aster family annual leaf vegetable (Asteraceae). Most types of lettuce are consumed fresh and are widely served as the basis of green salads. Lettuce is typically a rich source of vitamins K and A, however, depending on the variety, the nutritional content varies.

The lima bean is a large disk-shaped bean used in succotash, also known as chad bean or butter bean. Lima beans came from Peru and have been cultivated there since 6000 B.C. The Lima bean is named after Peru’s capital city, Lima.

Lima beans are almost always called ‘butter beans,’ even in markets and restaurants in the southern part of the United States.

Lotus roots are actually the stem of the Lotus plant. The edible rhizome (root) of the lotus plant is a crunchy, delicate flavored lotus root.

Almost all parts of the plant are used in the cuisine: root, young flower stalks, and seeds..

It is a member of the family of Umbelliferae, including carrots, parsnips, parsley, and celery. The taste is like a touch of aniseed and curry, mixed with parsley and celery.

The yellow legume seeds of the Lupinus genus are Lupin or lupini beans. Mostly in the Mediterranean basin, Latin America and North Africa, they are usually eaten as a pickled snack food. The beans’ bitter variety is rich in alkaloids and is highly bitter until methodically rinsed.