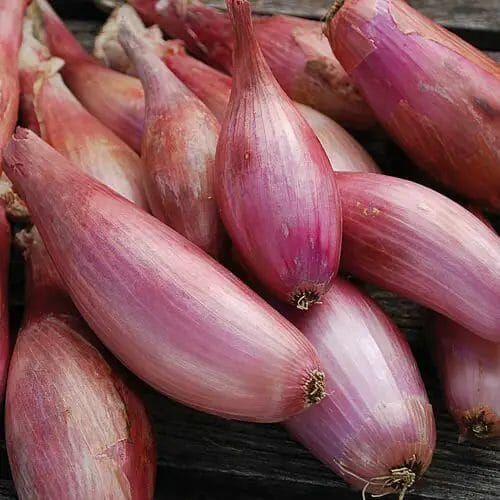 Scallions vs Shallots can you replace one for the other if you happen to run out?

Shallots and scallions are often thought to be one and the same. However, the two onion varieties are different. That does not mean, however, that you cannot substitute shallots for scallions in certain recipes. You just need to be aware of the differences.

Definitively, scallions are shoots that are harvested from a type of white onion before the bulb totally develops. They are not the same as their relative, the green onion, even though these two onions are regularly confused.

Shallots, on the other hand, look like small onions when they are harvested. You can distinguish them from other kinds of onions by the appearance of the bulbs.

Shallot bulbs are comprised of cloves, much like those seen on garlic plants. However, unlike garlic cloves, shallots are not covered with a thin membrane. Like other types of onions, shallots display a dry outer skin.

If you grow them in your garden, scallions will emerge upright and feature pale green tops. The plant looks whiter in color the closer you get to the root. Shallots grow much like garlic as they emerge in clusters which display a bulb that holds multiple cloves.

How Scallions Are Used

Scallions are often cooked and included in recipes. However, they can also be consumed raw. The onion-like plants are used as garnishes and often as toppings for salads. The green tops and white bottoms are both used in cooking.

Shallots are used in cooking preparations and can be either fresh or dried. However, in this case, only the bulb is included in a recipe. Shal﻿﻿l﻿﻿ots, when harvested, can be pickled and stored for as long as six months at a time. While shallots taste like a mix of garlic or onion, they lean more toward an onion flavoring.

Scallions possess an onion taste, but it’s a rather mild one. The taste is not as strong as green onion, but it is stronger than the taste of chives. Technically, scallions are not really a variety of onion. Instead, they represent one of various bulbing onion plants.

Therefore, they are usually harvested before the onion bulb totally forms. That is the reason why scallions are frequently referred to as bunching onions. The vegetables are featured in bunches in the marketplace.

How Shallots Are Used

Shallots are available in two different types – the French Italian shallot and the Welsh shallot. The Welsh shallot is frequently used as a seasoning or added to salads in recipes.

Scallions are often used in cooking and, therefore, are frequently chosen over shallots in cooked cuisine. When preparing scallions for cooking, use a sharp knife to avoid bruises. Trim the roots and rinse before adding them to a recipe.

Cooking Scallions and Adding Them in Recipes

Naturally, both scallions and shallots can enhance the taste of a salad or a prepared recipe. However, if you cook regularly, you will find that scallions can be used in one of a number of ways.

For instance, you can prepare bacon-wrapped scallions or grill the vegetables and serve them as a side dish. Scallions are also a tasty topping on pizza and delicious when included in dips.