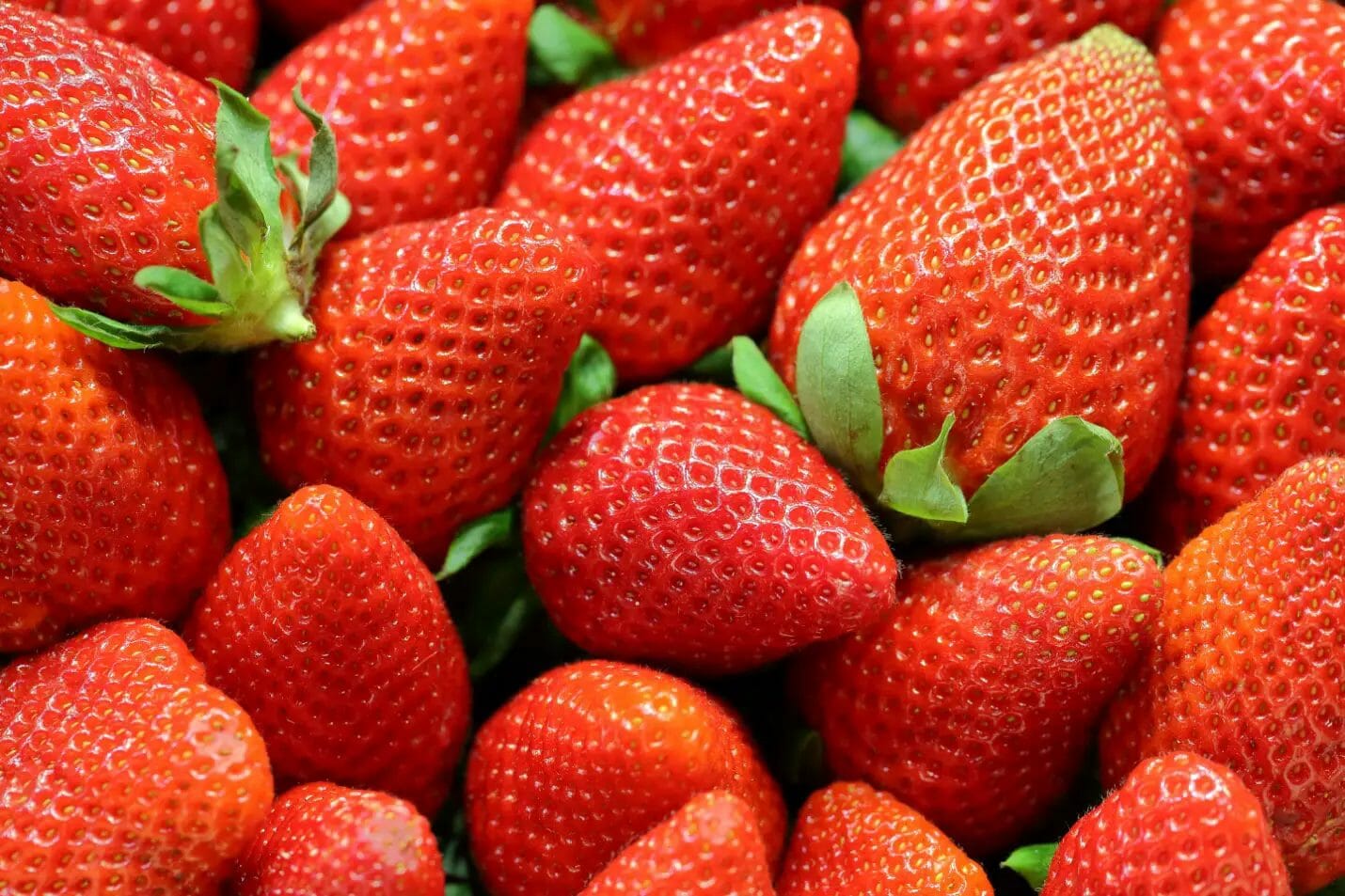 Fruits are a part of our daily life. Some people prefer to eat them raw and in their natural form, while others like to make them the center of different desserts, cakes, jams, and jellies. Different fruits have different shapes, colors, tastes, and outside skin. Some have firm flesh, while others have a soft one. In some fruits, you will find many seeds all lined up together, while in others, you will find a singular seed that makes up much of the fruit’s mass.

You have probably heard of Star Fruit and strawberries, but have you heard of the Surinam Cherry or the Sea Grape? Some of these fruits are not found everywhere, which is why most people are unaware of their existence. If you want to learn more about different fruits, Read on to find out about the many fruits out there that start with S. There will certainly be several surprises along the way.

An oval, oblong, or conical-shaped fruit, the Safou is a fruit with thin skin and a waxy coating. When it ripens, it turns from shades of white or pink into dark blue, violet, or a blue-black sort of color. It has a slippery taste with a tangy acidic flavor.

Also known as Mock Buckthorn, the Sageretia fruit family comprises almost 35 different species. The fruit is found in other parts of south and eastern Asia and the northeast part of Africa. There is a soft leather texture on the trunk that comes in many different colors. Its leaves are used as an alternative to tea in parts of China.

A plant native to the Sonoran Desert, these are long tree-like cacti with branches growing out of them. As their age progresses, these arms grow longer. In late spring, they begin to produce white flowers, and by the time summer comes, they have grown red fruits all over.

A native of Indonesia, the Salak or snake fruit is a fig-shaped, strawberry-sized fruit known for its nutty-brown scales on the outside. It is a spongy, fleshy fruit with a fragrant aroma. You will notice citrus, pineapple, honey, and soap when you bite into it. This is as common as oranges or apples are in the United States.

The Salal Berry is a berry with a black-blue color to it and an almost hairy exterior. They are known to possess several health benefits, such as being an antioxidant and reducing the risk of cardiovascular diseases, cancer, and other neurodegenerative diseases.

A berry similar to a raspberry, Salmonberry is a fruit that is either red, yellow, or orange. Salmonberry is found in most coastal forests in the US and Canada. The fruit has a sweet taste and tender feels, making it a staple in jellies and jams. For centuries, it has also been a part of the Alaskan indigenous people’s diet.

There are three types of Sandpaper Figs:

Creek Sandpaper:  Very sweet, hairy, and round figs. When they ripen, they go from purple to black. Its leaves carry a sandpaper texture.

Sweet Sandpaper: A sweet, smooth, squat-shaped breed of figs. The leaves on these figs have a velvety or hairy texture.

Shiny Sandpaper: An egg-shaped fig that has a yellow-orange texture. It also has a sandpaper-like texture on its leaves.

The Santol fruit is an oval or round fruit with fuzzy, leathery, almost wrinkled skin. It goes from green to golden yellow, sometimes becoming a red blush almost. The fruit has a white pulp inside with cotton-like consistency that is soft, juicy, and slippery. Its taste can range from being very sweet to sour.

A native to the Caribbean, Central America, and Southern Mexico, the Sapodilla is a tropical evergreen tree family member. Its fruit is eaten fresh, and the latex from its trunk is an important ingredient in chewing gum. Its fruit is an oval-shaped one with a rusty brown exterior and a sweet flavor compared to a pear with brown sugar.

The Sapote fruit is a spherical fruit with a rust-brown peel. Inside, the flesh has a musky and mild flavor with a creamy consistency. The fruit is a common ingredient for ice creams, smoothies, and other foods.

These berries look like blueberries but are closer to the apple family. Its flavor can be described as sweet and like a nutty almond. They are high in protein, antioxidants, and fiber, making them very good for you. Much like apples, they continue to ripen even after being plucked.

The Satsuma is a species of citrus. It is also known as Satsuma Mandarin and is one of the sweetest citrus variants out there. One of its characteristics is its seedless flesh and loose leathery skin. Compared to other citrus fruits, it is a lot easier to peel. It is a very delicate breed of citrus and does not respond well to careless handling.

The Sea Buckthorn is a plant that has been used in herbal medicine for a very long time. Its fruit has often been an ingredient in drinks, jams, and pies. It contains antioxidants, essential fatty acids, and vitamin E and C. This makes Sea Buckthorn rich with a range of health benefits.

The Sea Grape is a plant that belongs to the buckwheat family and grows near the coastal beaches of tropical America and the Caribbean. Towards the end of the summer months, the Sea Grape grows a green fruit in grape-like clusters. It goes from green to purple as it ripens.

A small shrub that grows white spring blossoms provides a year-round sight to behold. The fruit bears are a fan favorite amongst birds and other small animals. The serviceberry is a staple used in cakes, muffins, pies, jellies, and cobblers.

The Shipova is a hybrid of the European pear and the common whitebeam. It is a pome that has sweet yellowish flesh. The taste of this fruit is similar to a pear.

The Siberian Kiwi is a fruit that goes by several names, including kiwi berry, dessert kiwi, cocktail kiwi, and many others. It is a grape or berry size fruit similar to a traditional Kiwi. Unlike the kiwi, it has green, purple, or brownish skin with a smooth texture and an occasional red blush.

The Silkworm Thorn is a tree with a prickly exterior. The fruit that grows on it resembles a mulberry. It ripens from a red to a maroon-red color that has rich flesh.

The Snowberry is a fruit that grows on the Symphoricarpos tree. Its berries grow in either white, pink, red, or even a blackish purple. Inside these berries, you will notice that it looks like granular snow. Furthermore, the flesh of these fruits has a spongy consistency and contains whitish stone seeds.

The Soncoya fruit is a round fruit with brown felt-textured skin on it. On the outside, it has hooklike prongs growing out of it. Cutting into it is a challenge due to its hard exterior. The fruit has a soursop-like texture when you cut into it and can be described as stringy.

The Soursop is a fruit with an aroma familiar to the pineapple. Its flavor has been described as a mixture of apples and strawberries with an almost sour citrus flavor. Inside, the texture is thick and creamy, much like a banana.

The Star Apple is a native to the Central Americas and West Indies. Growing to the size of an apple, the surface is smooth yet firm. Inside, the flesh is tasty, sweet, and can range from white to purple.

The Star fruit is a sour and sweet fruit known for its distinctive five-point star shape. The star fruit is a popular ingredient in several dishes with its edible skin and flavored flesh. The fruit itself is either yellow or green.

One of the most common fruits out there, the strawberry, is stable in many parts of the world. It is a native of the northern hemisphere and is a fruit that has plentiful vitamin C in it. Furthermore, it is commonly used on its own, as part of a dessert or as a filling. Many desserts have strawberries at the center of everything, mainly due to their sweet taste.

Strawberry guava is a fruit that is very similar to regular guava. It has a fragrant and juicy pulp with a taste that has an essence identical to that of a strawberry. The Strawberry guava can be eaten fresh or used to make jam, jelly, or juice.

The Strawberry Pear is an oblong-oval fruit coated with a flashy yellow or bright red base of the scale. When you cut into it, you will find a juicy, white pulp that is sweet to the taste and has small, partly hollow seeds.

The sugar apple is native to Asia and the West Indies. It is typically found in a pale green color that can also vary in pink or blue shades. Inside, the flesh has creamy white textures that are sweet and taste reminiscent of custard. Hence, it is also called a custard apple in some parts.

The Surinam Cherry is an oblate fruit that turns from green to orange as it matures. It goes from bright red to deep scarlet or purplish maroon when fully mature. The flesh is orange-red that is juicy with an acidic or sweet taste with traces of bitterness.

Sweet Apple Berry is a fruit that looks similar to grapes in their shape but turns purple or brown as they ripen. Inside, it tastes almost like an apple with a hint of aniseed. The seed inside has a very bitter taste, so make sure you remove the seed first when you eat it.

The Sweet Lemon is a part of the citrus hybrid with a low acid pulp and a low acid juice. They exist in different forms, such as the Lumia, Palestinian Sweet Lime, and the Limetta. They are not derived from traditional limes and have the grouping they belong to.

The Sweet Orange is a form of modified berry with its flesh segmented into carpels. There are different variations of the sweet orange, such as the mandarin with a flattened shape or the blood orange with its distinctive red flesh.

The Sweet Pepper or the Bell Pepper is one of the most common ingredients globally. Existing in its famous green, yellow, or red, the bell pepper is traditionally a fruit, specifically a berry. However, bell pepper is treated as a vegetable in almost all cuisines.

The Sweetsop is a fruit that belongs to the custard apple family. Like the custard apple, the sweetsop has a hard crust, but a custard-like pulp inside that is sweet to the taste and can be eaten raw.

The Sycamore Fig is a family of figs native to many parts of Africa and Lebanon, Cyprus, and Madagascar. Like other figs, the Sycamore fig turns from yellow to red as it ripens.