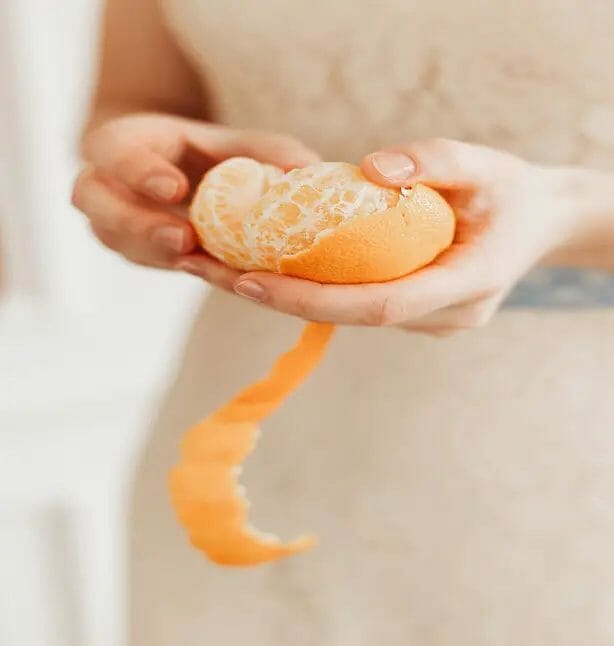 If you are looking for fruits that start with the letter O, you have come to the right place. Everything from oranges to olallieberries is on this list! There might not be every O fruit known to you in this list, but there are many.

If you have never had any of these fruits, try them now and let us know what you think in the comment section below.

In terms of O fruits, nothing beats oranges! Therefore, it tops our list of fruits that start with O. It’s hard to resist munching on these orange delights, which are about the size of an apple. They are a great addition to salads and lunchboxes. Some people also prefer to use them to prepare juices for breakfasts.

If you like oranges, chances are you have a favorite among the many varieties available, including mandarin, navel, and Valencia.

Not many people are familiar with this fact, but olives are fruits. There are more than 2,000 varieties of olives. However, green and black olives are the most popular ones. In most cases, people eat the green ones with pimentos because they are saltier. On the other hand, there is a slight bitterness to the black ones; therefore, you might not want to consume them whole. However, they are fantastic on pizza.

An orangelos are a cross between an orange and a grapefruit. Even though this fruit has both qualities, its appearance is dominated by that of the grapefruit. However, it is smaller and tends to have orange skin. When you cut them open, the inner part of this fruit is pinkish-red. Slice them in half and scoop out the flesh with a spoon – the easiest and most preferable way to consume them. You might think that this fruit has the same taste as oranges; however, it doesn’t have the same level of sweetness and syrupiness.

Olallieberries look a lot like blackberries. However, they are much longer. Black with reddish-purple highlights, these berries feature a cluster-like structure and glossy finish. Like blackberries, they can be eaten and used in various meals and recipes.

Moreover, you will find the right balance of sweetness and tartness in these luscious berries. There is a good chance that your hands and clothes will be stained by their juice because they are just that tasty! However, if you want to avoid getting the dark purple juice all over yourself, you should avoid eating them in bulk as a snack.

Otaheite gooseberry has many names, including Malay gooseberries, Tahitian gooseberries, West Indian gooseberries, and star gooseberries. You can eat these yellowish-orange berries in any way you like. You can roast them, dry them, or eat them raw – the choice is yours! Or you can utilize them to produce a luscious jar of jams!

Since they are rich in antioxidants, these gooseberries are also used medicinally in India, where they are effective in treating cancer, diabetes, and stomach ulcers.

Orin apples, referred to as sweet orin apples by the Japanese folks, are native to Japan. These apples are huge and can take various shapes. They have ivory-colored meat and yellowish-green skin. Crispy and juicy, they taste more like pineapples or pears than apples and have an almost tropical, immensely sweet flavor.

The oroblanco, also known as the sweetie fruit, isn’t a grapefruit in the traditional sense, even though these two fruits have several similar qualities. During ripening, the fruits’ color changes from green to yellow. Since it has no seeds, it can be consumed whole, making it one of the most favorite fruits of the masses. Moreover, you can easily peel them without any difficulty. Those who like the taste find it a little harsh, while others find it too sour.

The scientific name of the oil palm tree is E. Guineensis. Since this tree produces oil in abundance, it was named oil palm tree. This tree is native to West and Southwest Africa. Aside from the Gambia, the Angolan capital of Bangui is the only country in Africa where they can be found. You can also find them in Madagascar, Malaysia, and Indonesia.

The oil palm tree can reach a height of 20 meters. A few tropical countries like Indonesia and Malaysia have commercially farmed the tree since it was successfully planted in tropical regions. In 2007, Indonesia began to take the lead in the world’s supply of the oil extracted from the oil palm kernel.

The Otaheite apple has a high concentration of vitamin A and C, which improves vision, promotes good hair, inhibits the formation of cataracts, nourishes the skin, and strengthens the immune system.

Otaheite apples are primarily eaten raw in Jamaica, plucked off the tree. You can consume them whole or utilize them to make cocktails. The cocktails made with these apples are immensely popular around the globe. You can also use these apples to make a sauce. Just add brown sugar and ginger to a couple of Otaheite apples and get yourself a delectable sauce perfect for desserts!

Ortanique is a medium-sized fruit with a citrusy aroma and a slightly sweet flavor. The best ortaniques, according to many, are Jamaican ortaniques. They have pale yellow flesh and no seeds.

It has European roots. However, today it can be found all around the world. Sycamore trees can be divided into North America, the United Kingdom, and the Middle East. Trees can be found in various environments, ranging from urban areas to remote forests.

The sycamore trees bear figs that have mulberry-like leaves. They also have hard wood and edible fruit that is prominent Ficus species.