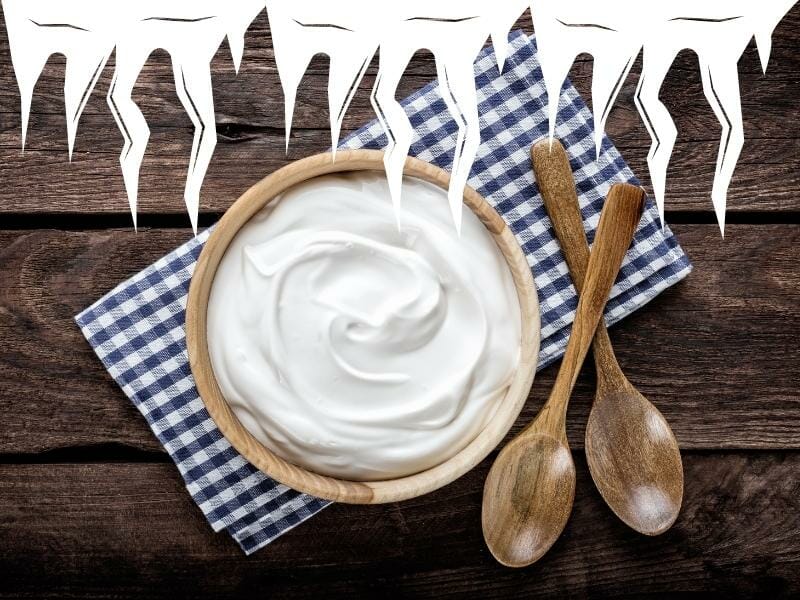 Sour cream is one of those foodstuffs that definitely fall into the acquired taste category. For those who do like it, however, it can be one of the most versatile spreads out there.

If you like sour cream, you can find a whole host of different recipes that call for its use.

Even so, however, the question as to how to best store sour cream can be a tricky one to answer.

In particular, it can be difficult to figure out how cold it should be when storing your sour cream. Should it be kept at freezing temperatures, or should you stop short of that?

Let’s tackle that age-old question, then, and answer once and for all – can you freeze sour cream, should you, and what might doing so do to the taste and texture of the spread?

Can You Freeze Sour Cream?

Let’s say upfront that, yes, you can technically freeze sour cream. Doing so will not cause the cream to completely harden into an unrecognizable slab.

That being said, it is worth noting that there is a distinct reason why this question exists – namely, that just because you can freeze your sour cream doesn’t mean you necessarily should do so.

For one thing, sour cream, like most spreads, is best used at its freshest. Once you pop the top, the clock on that sour cream’s short life span has begun.

You might be able to “freeze” that clock for a bit by popping it into the freezer, but the effect of this will depend greatly on how long you plan on freezing that sour cream. A day or two, until you have use for it again? That might work out fine. For weeks on end? Now things start to get trickier.

Your sour cream shouldn’t go bad or anything of that sort, so freezing it can work out in that sense. Even so, freezing it for that long can change its texture, and it might well not be as smooth and creamy of a spread as it was the day you got it.

That being said, just because your sour cream may have lost its unique creamy texture doesn’t mean that the taste is gone.

As such, while if you are using sour cream for both its taste and texture you’re almost certainly going to want to use it straight away, if the former is more important than the latter, or if you’ve only frozen it for a short while and it is still creamy enough to work with, there are many ways you can still use it.

Before you can do that, however, you’ll want to make sure to let it “thaw” in a normal refrigerator for a day or two so as to keep it at a cool temperature without having it remain in the freezer.

If you are cooking up something that’s already hot enough to thaw the sour cream on its own, such as a soup or similar item, you might be able to just take it out of the freezer and use it as is.

You’ll naturally want to be sure that it does indeed thaw out in your recipe before you proceed too far with it, but for something as hot as a soup, that should happen fairly quickly.

If you are planning on using it for cooler temperature cooking, you’ll want to make sure that the sour cream has returned to that cool-but-not-frozen state in the freezer, and it may help to give it a stir or two with a spoon before adding it to your recipe.

Used correctly, frozen sour cream can still be a wonderful part of your next recipe!